9 Designers and Artists I Know is a 2014 series of stories of nine designers and artists I know and admire as they navigate their world and produce art and design projects that make me want to work even harder. I repeat, I admire their talent, work and spirit.

In my first blog about the 9 Designers and Artists I know on Hollis King, I hinted that the next generation was still trying to sort it out. Indeed, it made me think of three young product designers who were students at Parsons when I was there. They entered my life in ways that I think most of them did. Young, Quiet and ready to learn design. Each of these young women are individual, independent and at the cusp of sheer spectacular beauty in the work I see them produce now and there is in me the need to say, “take the leap”, your soul will thank you.

Cool, collected and very much the sophisticated Frida Kahlo-like Mexican American designer Johanna Flores was my student assistant at Parsons for 2 years when I was the Associate Chair of Product Design. She was fiery and cool at the same time and it was ceramics that brought out her passions and revealed her intensity to create shear beauty.  Mexican chica, I used to call her silently, and then and now, I expected bursts of brilliance, so as I thought of the next generation, she and 2 others in this blog came to my mind as designers I admire and know. Selecting her and the other two and writing about them as one group was easy because I feel they are standing on the edge of the mountain and need to take that leap to soar. 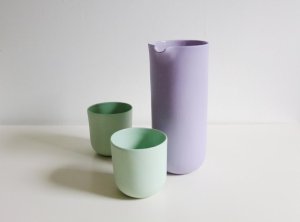 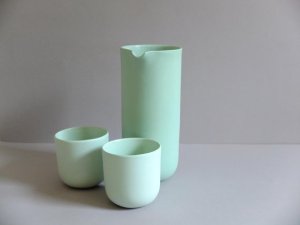 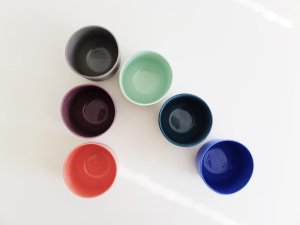 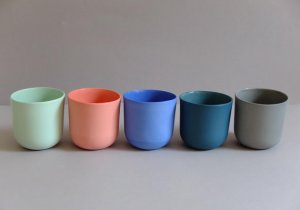 When you see Johanna’s work, you first would not get it but if you understood the craft of ceramics and the delicate technique of reviving an old process from Wedgewood of color mixing, then you understand that delicate balance. As she says on her site, “the rich and exquisite colors on the porcelain pieces are achieved by coloring the porcelain clay itself, as opposed to applying a surface glaze. Coloring porcelain is a very labor intensive and a rather costly process. The technique of coloring porcelain was discovered and first used by Wedgewood on their legendary Jasperware during the late 1700’s.”  This coloring technique looks simple, but you would not understand how its simplicity was hard to achieve.

She is re-imaging ceramics through simple vessels and objects. I call it, a mix of Mexico and London, after all, she was raised in Mexico, lived in California, educated in New York and escaped to London to work and live, before returning to work in all things corporate America for the likes of Martha Stewart. Complex, no. It pays the bills and has given her time to return to ceramics again here in Brooklyn.

I thought of her over the years since she left Parsons in 2003 as a graduate and as serendipity would have it, I kept bumping into her after she returned from London, first at the Dumbo Festival, on a train platform and around my neighborhood, now hers. Each time, she walked away, a thought crossed my mind, when would she take it and own it? The stage was hers, she needn’t be shy, she is a diva, the good type. Smart, talented and creative. She was and is her own person and she needs to bring Frida Kahlo out to the design stage. Take it. Chica. Visit her site for more details at http://www.johannaflores.com 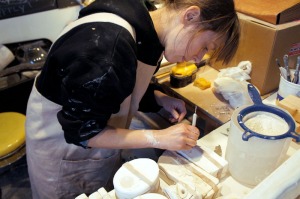 Gregarious, cool American Norwegian fiery young designer, ever so quirky, always questioning herself, but daring to take risks and sometimes stopping ever so short of taking the full leap. Like Johanna, she was at Parsons in product design and also found her passion in ceramics. Christine Facella came into the program with questions, good ones too. And I remembered her well. In my 6 years at Parsons. I could almost say I knew 600 students very well who came through the program and like most of them, she arrived quietly, nervous at first and left loudly, confident, sure of herself and ready to take the world on.

Christine has been crossing cultures, her American side was always in conflict or in tune with her Norwegian side so when she left Parsons in 2004, I was unsure what she would do but knew she would go about it in her own way. And a few years later she walked into my store, then, on Washington avenue, accidentally, and informed me that she begun taking classes at the Brooklyn Botanical Garden. I recalled then that she was so into ecological issues and it fit her. She was still searching but building her skills and knowledge. She then went on to work as an illustrator and model maker at the Museum of Natural History in 2005 where she found her pace and it helped her work on her extraordinary collection of porcelain animal skulls.

A reviewer of her work wrote, “the accuracy and intricacy of her work result from sculpting up to 20 molds for each piece.” Another writer called her pieces “quirky, decorative pieces, sometimes adorned with gold, are intricately detailed with near anatomical correctness.” Her skulls sells to stores in the Americas, Europe and Australia, and she is represented by Michele Varian in Soho. This impresses me because we have had talks about mass market and commerce and even the very concept of money. Her work reminds me of Georgia O’keefe and she is an artist, after all.

In 2007, when she opened her design company, Beetle & Flor, she had a clear mission: putting her design services to good use: offering design assistance to under-served communities who depend on making crafts as a living. It made me proud as she was one of the students who took on Tony Whitfield’s (the chair of Product Design) mission of design for social good which we ran as part of the product program from 2000 – 2008. My six years at Parsons was just that. Her mission has taken her to India where she has been working with NGOs. This is again how we began our talks last year. I reached out to explore making clothes in India with some of the NGOs she worked with as I realized, it was time to work with new groups. We also have been talking about her trying to figure out what next. Yes, she, like Johanna is at that place too. To jump ahead and to soar, or to stand and wonder. Visit her site and read more about Christine here: http://ranimamarina.livejournal.com/128808.html or see her discussing her work at http://daily-spots.com/skulls-for-sale-christine-facellas-beetle-flor/ 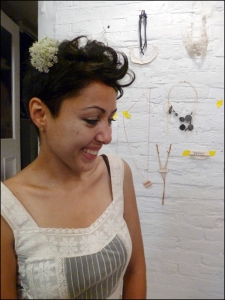 Andrea Miranda Salas is the most complicated of the three designers, she’s taking longer to brew her mix and her work like Christine’s is breathtaking. She is delightful but intense. Happy but complex. Her work is her signature, the spirit of an artist, The delicacy of the pieces, the sheer honesty of her soul in her work, and the craft astounds me. I am humbled by its beauty. Andrea is from Costa Rica and life should not be complicated but she meanders through the mode of what’s next. I want to yell, dive in. Just leap ahead. I am cheering for you. Your soul will soar higher.

Dumbo brought us back together again after she left Parsons in 2004, she was there freelancing at West Elm, what most designers do. I could tell immediately it was a job and not her passion so like I did back at Parsons, I asked if she was doing her work. She responded, “you know, I am starting to go back into the ceramics studio”. And her face lit up. I was pleased to see this excitement. She was there in Dumbo for a while before she disappeared again into another freelance gig. Almost a year later, I got an invitation to an exhibition of her work. I realized that since I left Parsons, I had taken a hiatus from going to any of the students shows  so I decided to turn at the Brooklyn Workshop Gallery run by Martine Bisagni in Carroll Gardens. I was not disappointed. I was blown away. Andrea has always been complicated yet inwardly delicate. The exhibition was entitled: Andrea Miranda Salas ELEMENTS OF PROTECTION in July 2012. 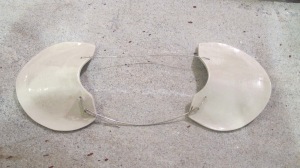 Her work is always challenging her assumed versions of herself, so to see her resolve it in her work was powerful. She had accomplished what it took most of us a life time to achieve.  Andrea focused on the idea of protection of one’s self, through delicate armor, she has created the poetry of her soul. And ironically, she is still on the cusp in her mind. She is still searching. So, I want to say, you’ve got it. Damn, you really got it. Own it. Own it. Simply, soar like an eagle. See more of Andrea’s work at her website: http://www.andreamirandasalas.com/

As a designer and educator, now, an entrepreneur and story teller, I am fortunate and  privileged to see these three designer blossom from “the kids” to full womanhood and most importantly, to be the deep, passionate, and rich spirited artists that they are now. Not rich in money, but in their souls. They have affected my life deeply like the other 597 product students. I honor and respect them, even their choices and paths they take. I learnt from them to take the leap, and banish caution. Six years of holding their hands as the tried and failed, tried and succeeded as students is enough to make you do what you plan.

This next generation trio have the passion, talent and creativity to do anything and from far and close, I see that they are holding back. To sell their work as mass market objects or spectacular one of a kind pieces is the struggle, to be the true artist which is in their nature, their DNA, or to “sell” out and be the designer of their ceramic journeys of mass market objects. I am torn for them, my soul says artist but my brain says designer. And the truth as I write this, I want both for them, just do it. Take the leap, stop being apprehensive and cautious. Commit, because life is too short.