This week was a mixed one.

The first lesson was having a staff take ownership of a store that needed ownership. Sometimes it takes a person a while to get there – I typically see it in less than three months, and it happened this week in just that time frame. I am delighted by this and what it does for me as an owner of Calabar Imports – is simple, it lightens my load so I can work on other things and pay attention to the holiday season that seems to be speeding up, quicker than I hoped.

The second lesson was to actually re-listen to myself as I took time to build a new project concept that is related to the growth and capacity needed for Calabar Imports. This is in part to continue to reinvent the brand and build our capacity as market forces are changing; and we have to be more dynamic as a company. This was the week to do that reading in full detail about 2016, forecasts, changes and also what opportunities they would be. I looked at fashion forecast again, imports and labor issues, currency fluctuations and war across the globe. In my business, all these things affect the price of manufacturing – thus, the cost of clothes and goods. This is the time when I decide if I should change the countries where I order from, who I buy from as prices go up and down, whether it makes sense to make in one country versus another. All high risk decisions, but all carefully analyzed.

The third lesson is so simple: everything happens in its time. I conceptually know this and have been saying so to myself often. This week, several realities lined up as they should. I cannot reveal all the details but time will make it apparent at Calabar Imports. In preparation for January and February, I access what will happen with the weather again, another look at the Farmer’s Almanac to see if it makes sense to bring in spring clothing earlier or latter. Oh, that winter blues reminds me that we might have that snow again and it is time to get salt to all the stores again; and yes, I need two shovels this year. 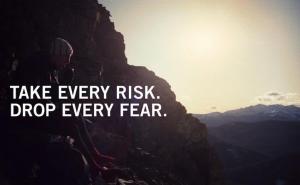 The fourth lesson this week is about mentoring. I talk about it and actually do it regularly and this week – it was about reinforcing and building two young people. A young designer who had become wary and disappointed with the fashion industry. All it took was showing him a path to beginning a process of transition from school to the real world. So, often when I was at Parsons, this was the role I played – listener and strategist. The second was a young person who made a decision that now has delayed a lot of possibilities. Sometimes, we take these stances and stick with them and hurt ourselves more. It makes sense then but it puts us on a real rot. Both young people were in the world of fear and were not risk takers. If I could bottle a risk-taking juice that keeps me raging to do more or to jump, I would be a millionaire today.

October and early November in retail follows patterns, it slows down for a bit and for me at Calabar Imports, this is the time to catch up with building an event calendar for 2016, looking at staffing and setting up a system to train new staff as I will be adding more staff for more flexibility yet again. It’s an ongoing process, I remind myself. All in a week.

Sunday and Monday came too fast but finalized a collaboration with International Coalition of African Fashion. It’s been on my mind to collaborate with them but also to help them grow. Each year, I do about 3-4 collaborations – they are specifically targeted in fashion and retail. This is where Calabar Imports is situated. I often have to state that to people who ask me to go outside that realm. After almost 11 years, I know what I am focused on. And as I say it, this reminds me that I have yet to plan our anniversary for December. Another to do item for next week. Check back to read more here next week. And please share this blog.

The week ended mixed, sales up; one less staff on one day, and one more staff to add to the brand. It is the daily grind as a retailer at Calabar Imports, I spent time figuring out the next move and what bit I have to change or secure after I thought I was ahead.